Having conducted field research on maternal, child health and nutrition outcomes in South Africa, Ghana and Kenya, I was eager to explore these issues in low-resource settings in India. As a sociology and global health student, working for the Antara Foundation in Rajasthan presented a number of captivating intellectual challenges because of the extensive literature on Rajasthan’s skewed sex ratio and abysmal maternal and child health indicators. With the responsibility of eighteen Anganwadi Centers in Khanpur, Jhalwar, I was excited about the potential for discovery afforded by this opportunity.

Through Antara Foundation’s fellowship in Jhalawar, apart from contributing to better health outcomes, I wanted to observe local attitudes toward female children during my field visits. Upon analyzing the nutritional status of male and female children in some of Khanpur’s villages, I often found that the likelihood of female children being malnourished was greater than male children. Male children were also given more opportunities to study compared to female children.

Always enjoy my interactions with the kids of Bhairoopura.

While some frontline health workers argued that the preference for male children was no longer common in their villages, many claimed that they are constantly counseling families insisting on producing children irrespective of the fact that it could potentially endanger the life of the expecting mother. In some cases, I have seen families with eight girls still looking for a male child. Perhaps the most stirring case was of a 35-year-old physically disabled woman who had delivered five girls, but her family was unprepared to relent until she gave birth to a boy.

Some of the families insisting on male children argued that children were a blessing from God and it was unacceptable for them to refuse even if it was life-threatening to the mother. In other cases, women were blaming their husbands for multiple pregnancies. Despite the Auxiliary Nurse Midwife’s (ANM’s) repeated attempts at counseling families, effecting a change in their thinking continued to be a challenge. In my interactions with frontline health workers, we talk about explaining the benefits of schemes such as the Rajasthan Mukhyamantri Rajshree Yojana, that incentivize the birth, immunization, and education of the girl child, to beneficiaries. Furthermore, I try to emphasize the importance of ensuring that beneficiaries receive the money that government schemes promise and any assistance that they might need in navigating banking systems because I have spoken with numerous mothers who have talked about their struggles in understanding basic functions such as debit, credit, deposit and withdrawal. Effecting behavior change is a complex process that requires constant reinforcement over a long period of time. In the short-term, using monetary incentives to promote the birth and healthy development of girls can be effective.


Ultimately, the Antara Foundation’s primary objective is to improve the lives of the people of Jhalawar. In addition to elevating the standard of maternal and child health delivery in Jhalawar, I hope we can work towards eliminating biases against the girl child. A healthy and educated female population will only serve to benefit Jhalawar and eventually, all of Rajasthan. As Karl Marx once said, “Anybody who knows anything of history knows that great social changes are impossible without the feminine ferment.” 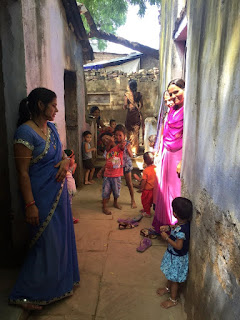